* In case of any delay in receiving the OTP, you may verify it later. Please proceed without verification.

Enter your City name or Pincode

Fairs and Festivals in Balasore

Balasore district, located along the north of Bhubhaneshwar at a distance of 194 km, is renowned for the Chanipur beach. Balasore is the site where popular missiles like Nag, Brahmos, Agni missiles were launched, and it is known for the Defense Research and Development Center. 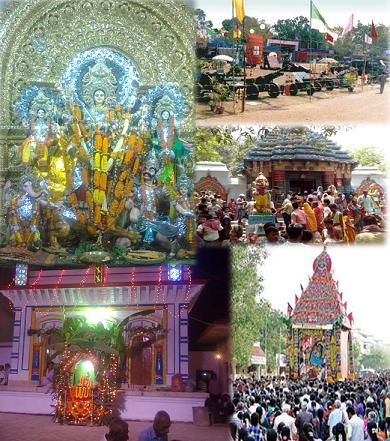 If one reads Balasore, the things that may come to the mind are defense, politics and history. While Balasore is popular for all of these, it is renowned for a beautiful culture too. A rich culture of food, music combined with festivities and events is how Balasore manages to relive its true lifestyle. There is a diversity observed in the people of this culture. One will find that people of this city celebrate both Indian as well as Western festivals and cultures. Art and music is a pretty inclusive part of this culture. Major as well as native festivals are celebrated with pomp and joy across this town of Odisha. Here is a peek into the diverse and vibrant culture that Balasore in Odisha is known for.

Makar Sankranti, also celebrated as Uttarayan, Pongal, Sankrant etc. in other parts of India, falls in the mid of January. This festival is celebrated with great passion and joy in Odisha to mark the entry of Sun into the orbit of Capricon. During this festival, the Sun Deity is worshipped with joy, and enthusiasm by the Odiya people. If one wants to celebrate the gusto of this occasion while in Balasore, one should attend the Makar Mela, as a mark of celebration and worship of the Sun God.

Apart from the Sun God, this festival also marks the harvest of paddy in the fields of Odisha. This mela is held at the Makar Muni temple in Balasore. Apart from Balasore, the maker mela is a part of other areas in Odisha as well which includes Hatkeshwar at Atri, and DhaBalasore in Cuttack. In Odisha, apart from Balasore, this festival happens to be a major part of Kalijai, Atri, Ghatgaon, Keonjhar, Jashipur and Jagatsinghpur.

It is the most colorful festivals of Balasore. It is celebrated during the months of January and February. This festival is celebrated at Khandagiri in Balasore. During this time, pilgrims from India and abroad come down to Balasore as part of a grand congregation. It is celebrated on the 7th day of Magha, the brighter part of the day. On this auspicious day, the pilgrims take a holy dip in the Chandrabhaga Tirtha which is very near the sea. This festival is especially conducted to celebrate the rising sun during this month.

The mela is part of the grand celebration, which continues for about a week or so. One would find vibrancy and colors being bestowed along the route of this mela. The culture is very much a part of the festivities.

Taratarini temple situated Kumari Hills in Odisha worships the twin Goddesses Tara and Tarini together. The whole manifestation offered by the Goddess simply translates into “Adi Shakti”. This is the only reason why Taratarini temple is also known as Shakti Peeth. Each year during the month of Chaitra, the Taratarini mela takes place on a grand scale.

This mela or grand congregation occurs on every Tuesday in this temple where lakhs of devotees from across the country and the world visit the temple to seek blessings from the Shakti Goddess. Mundan, a popular ceremony of India for newborns, is performed at this temple during the Taratarini mela. The blessings taken during this time protects the new born from all evils. This is one of the biggest fairs for Balasore too. People flock to the mela to seek some happiness while praying to the Goddess to give them strength to fight the odds. This mela depicts the beautiful culture of the district, and one should visit the mela just to observe the beauty of worship, tradition and culture all put together.

It is believed that Goddess Kali protected Lord Ram during his ordeals to fight against evil and win. It was due to Goddess’ prevelant blessings that Lord Ram triumphed. To celebrate the win, he took Shiva and Durga on a chariot out of their abode as a mark of satisfaction. As Lord Ram is devoid of any sorrow, the festival is named Ashokashtami. There are other legends too including the one that says
Parvati became sorrow free on this day after she met Lord Shiva.

On this day, a car festival is conducted or a simple rath yatra as it is described. On this rath Lingraj is seated in the rath and a grand congregation follows as the rath moves through the city. It occurs on the eighth day of Chaitra.

Lord Shiva is very important deity to the people of Balasore, or in general Odisha This is probably why the festival of Maha Shivratri is celebrated with pomp and joy in this city. One would see that the deity is worshipped with all the honour, and people fast the entire day and into the night to honor the deity and seek his blessings. Bhang is a very important part of celebrating this festival, and honoring the Lord. It is observed on the 14th night of the month of Phalgun as per the Hindu calendar. According to the English calendar this festival is generally celebrated during the months of February and March.

Eastern part of India celebrates Durga Puja with pomp and joy. This is a known tradition across the east. Apart from the famous Durga Puja, Balasore as a town believes in Kali Puja. This is one of the most important and imperative celebrations for the locals of Balasore. This festival brings home joy and celebrations as the whole town harmoniously wishes and seeks blessings from Kali. The puja commences with holy chanting Goddess Kali. The main reason why people worship Goddess Kali is to bring home prosperity. The day ends with bursting firecrackers and celebrations. On this auspicious event, one can see the beauty of cultural heritage and religion in Balasore. The belief for Goddess Kali ranks highest on this day.

This puja is quite famous in the eastern parts of India. For the locals of Balasore this is one of the highly enchanting form of religion or celebration that has to be celebrated. Apart from the above mentioned festivals, Balasore is also known to celebrate other festivals like the famous Kite festival, Ganesh Chaturthi, Vasant Panchami, Good Friday, Rath Yatra, Diwali, Christmas, Id and Muharram. It is known that an Akhada takes place during the Muharram festival in Balasore which is pretty similar to the Akhada that the people of Balasore enjoy dring Durga Puja. The Akhada is pretty familiar to the culture of this district. It’s a round the year celebration time for this lovely district of Odisha.

Comments / Discussion Board - Fairs and Festivals in Balasore